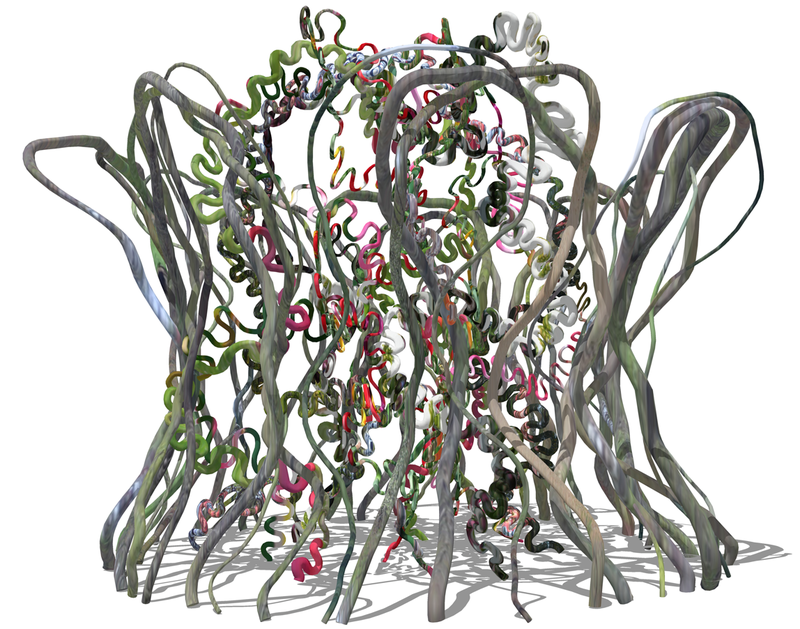 And so the story begins. Sometimes though it's really hard to find the story thread. That's the way I'm feeling after a day of attending Educon virtually.

Too many tweets perhaps. Too much information to absorb, digest and structure meaningfully.

Last night, after listening to the opening panel, I thought I'd found a thread. A story about story. The importance of narrative.

It started with a comment by Aaron Gross about how various well-known authors had started to write about food and industrial agricultural, and how this was helping his Farm Forward movement.

That made me wonder why there were so few authors -outside the usual education experts- writing about schools, pedagogy, educational technology, and the neo-conservative assault on public education.

Importance of story. Where are the novelists supporting an innovative and humane approach to education? #educon

Hiram Cuevas replied with the following.

@fredbartels fascinating how tech hasn't been mentioned re: storytelling. It's nvr been about the tech. It's about the connections. #educon

I'm not sure quite what he meant -the wonderful ambiguity made possible by compressing a thought into 140 characters- but chose to read his response as a confirmation of what my question implied. I responded to Hiram with the following.

@cuevash One of the few writers I've encountered who has built a positive story around technology and education is http://bit.ly/9hcCrL

Vernor Vinge is my favorite science fiction author. If you work in edtech and haven't read his Rainbows End you are missing a treat.

Anyway, the webcast panel discussion continued, other topics came to the fore, and I eventually went off to bed.

This morning, settling down in my favorite chair with coffee, iPod Touch and notebook, I thought I'd try and puzzle out the story concept a bit. I wrote a few lines in my notebook, starting with "Once upon a time." then had the thought that of course there is a popular writer who has written seven books exploring schools, pedagogy, etc.. I sent these two tweets.

Thinking about the power of a story. The most popular story of our time involves a school that embraces risks and magic. #educon

Looking at the tweets now, I'm not sure what I meant was clear (that tweet ambiguity again), but if you substitute information technology for magic, much of what J. K. Rowling writes can be read as a story supporting progressive education and the intensive integration of technology.

Schools don't need to be like factories. We don't need to be driven by the narrative being pushed by neo-conservative corporate deformers. Using information technology we can rebuild schools to be places of wonder, adventure, risk, innovation, caring, challenge and collaboration. Places in which each student develops mastery in the content and skills most meaningful to her or him. With this developing mastery they can reach out and work to make the world a better place.

That's the thread I want to hold on to. 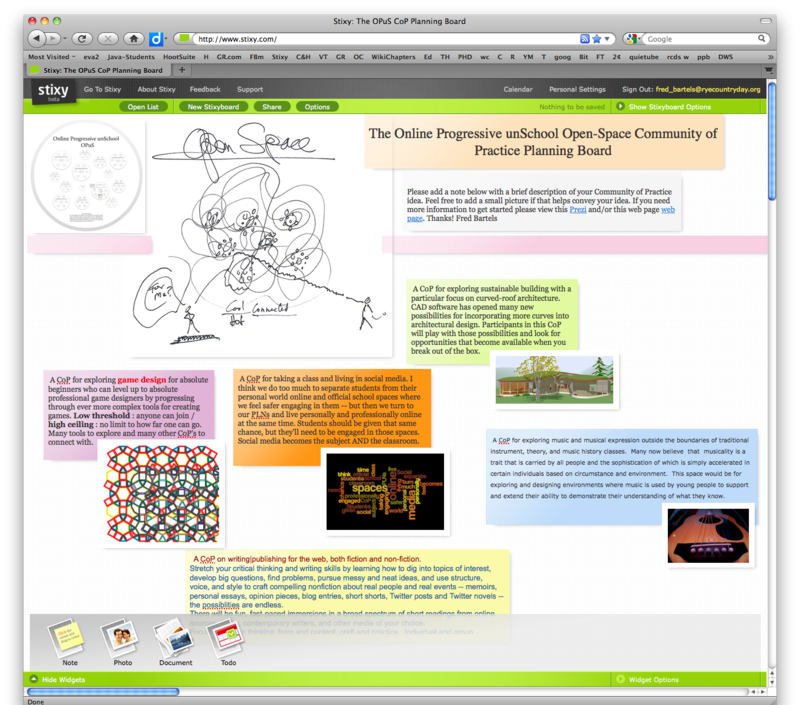 Thanks to four adventurous and intrepid souls the OPuS virtual board of potential Communities of Practice is off to a great start.

A big thanks to Al Doyle, Reshan Richards, Basil Kolani and Linda Vasu for putting up some great CoP ideas!

I hope we will see some more in the next few days. :-) 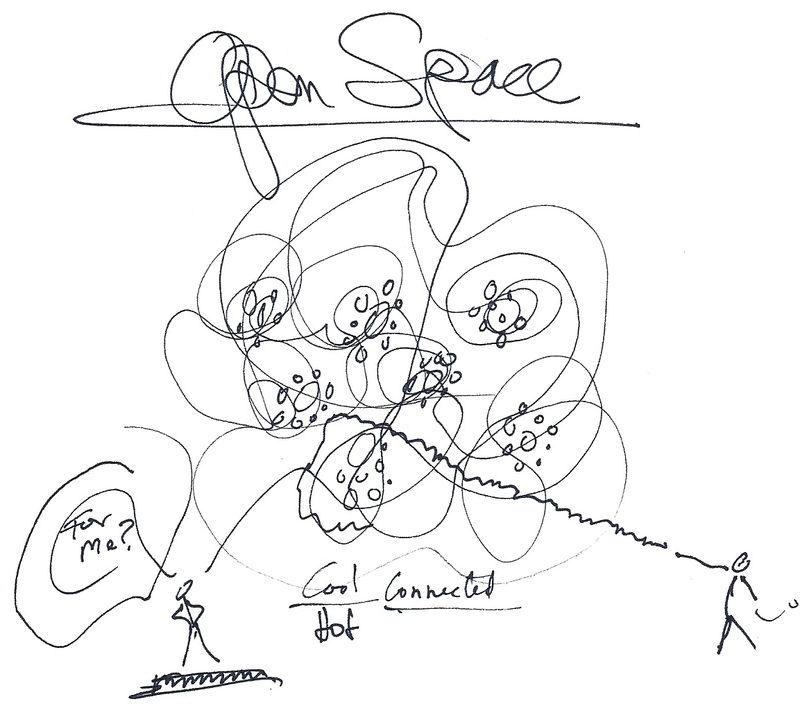 The Online Progressive unSchool is an open-source design for a non-profit community-created learning resource.

For OPuS to work it is essential to have the participation of a community of educators passionate about their areas of interest and about blended learning.

OPuS is conceived as a community of virtual learning spaces where teachers and students from around the world -who share a passion for a subject- can meet and work together to further their understanding and knowledge, with the overarching goal of developing solutions that help make the world a better place.

OPuS Communities of Practice (CoPs) will start with a teacher who is passionate about a subject. This teacher -in collaboration with the OPuS community- will develop a virtual learning space and Personal Learning Network (PLN) that will nurture and support their CoP. The elements of the virtual learning space will include a forum, a blog, a Twitter presence, and a wiki with an excellent and well-organized collection of references to the best online resources in their area of interest. The teacher's PLN should include other educators and professionals who share an interest in their subject. In addition to having a deep knowledge and passion for a subject, an OPuS teacher must demonstrate a sustained and solid commitment to helping students learn. OPuS teachers should be just as interested in helping kids grow as they are in teaching their subject. OPuS teachers embrace a progressive approach to education, which essentially means that their role is more of a guide than a dispenser of information. OPuS learning is driven by a student's interest. Motivation must be intrinsic. Students inhabit a community with fellow learners with whom they collaborate with respect and empathy, and with whom they work together to help others.

To get a sense of whether we are ready to raise the OPuS barn I'm asking those of you who might consider developing and mentoring a CoP to put a brief description of your CoP idea on the virtual unSchool open space board here: http://www.stixy.com/guest/102515 (Please note, in March 2011 CoP development moved here: http://opus1.wikispaces.com)

Putting an idea up on the board is not a commitment. It is just a sharing of ideas at this point. If a bunch of ideas get posted then that would be encouragement to move towards implementation. Otherwise, it's back to the drawing board. 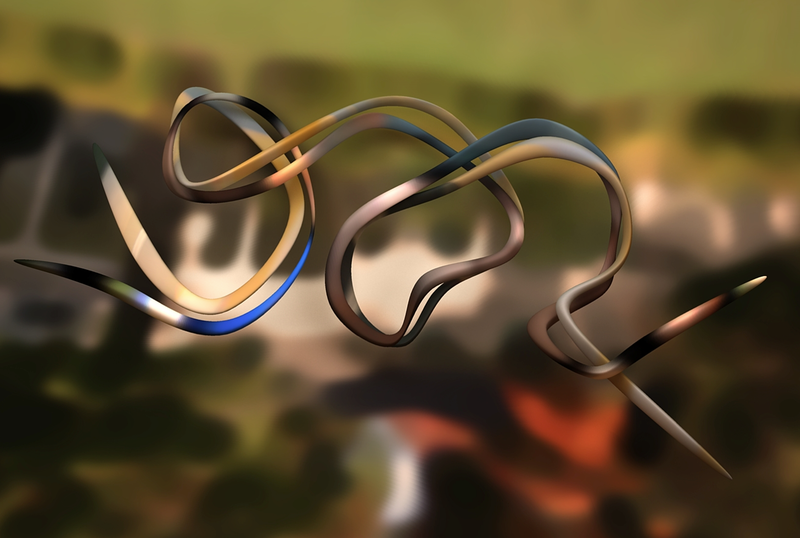 The image is a piece I did a few years ago called 'Thinking Along the Same Lines.'

Recently I've been finding myself thinking along the same lines as Linda Vasu. Don't know if it's the zeitgeist or that we've been moving in the same independent school edtech circles for the past twenty years. Anyway, it is fun to have my thoughts pushed and challenged by a deep-thinking colleague who is exploring many of the same issues that have my attention these days. 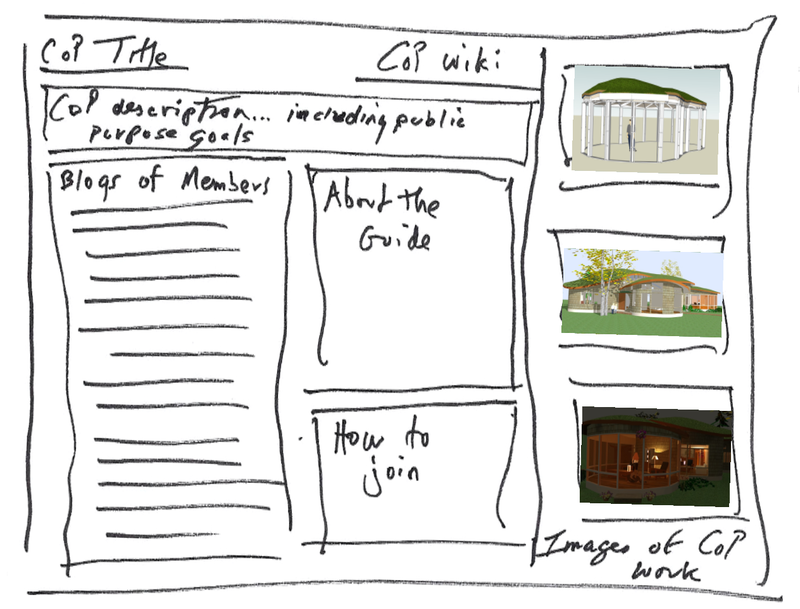 This completes the high-level design overview of the Online Progressive unSchool's online structure. Now I just need someone in the Drupal community to tell me if it is possible to build something like this.

A work in progress but the image captures my current thinking. The 'values' of the bars surrounding the central image are determined by metrics not directly controllable by the CoP. They provide an objective take on the quality of the work being done by the CoP members. This information would help a student browsing through a large quantity of CoP icon representations make decisions about which CoPs to investigate in more detail. 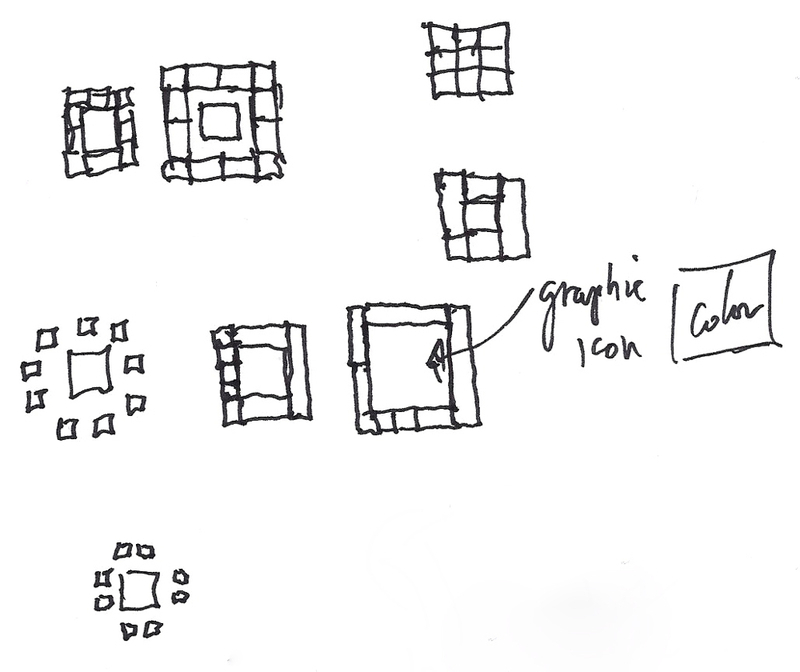 The goal is simplify. Take away as much as possible. Get to the essence.

I'm working on the design of an icon that will represent an Online Progressive unSchool Community of Practice (OPuS CoP).

The icon should convey information that will help a student browsing OPuS CoPs get a quick sense whether this might be a CoP where they could fit in.

Information that an icon could convey about the internal goal and state of a CoP might include: 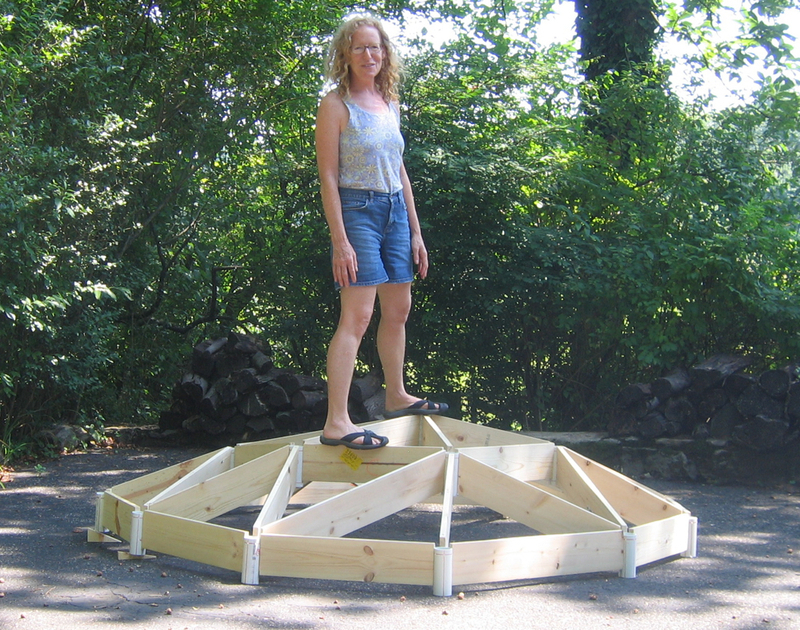 No, the first thing students will see is not this picture of my significant other standing on a framing structure for a curved roof. Those are just my passions.

One of my major goals for the Online Progressive unSchool (OPuS) is that it help students to discover their element, or what we sometimes used to call, their niche. For most of us a little exploring is needed to discover our element and OPuS should be designed to facilitate this quest.

I spent some time yesterday trying to imagine what a student would see when first encountering OPuS. I hope the Drupal community can step up and help turn this vision into reality.

•A student will first see a map, a landscape of objects each representing a Community of Practice (CoP).

•Each object has visual clues/attributes which convey information about the internal state of the represented CoP. Variables like size, activity, rating, value of work produced, etc..

•The objects can be searched and sorted based on their name, subject, attributes, tags, etc..

•Clicking on an object opens a window with more details about the CoP. A brief description of the community and links to the CoP wiki and the blogs of the CoP members would be displayed in this window. There would also be a contact link for the CoP's guide/teacher.

•You have to knock! The CoP guide needs to be approached for permission to join the CoP.

•Protocols are followed for protecting existing CoP members and the potential member.

•If the CoP appears to be a good fit for a potential member the new member is admitted on a trial basis.

If you have any ideas about this approach please feel free to share! 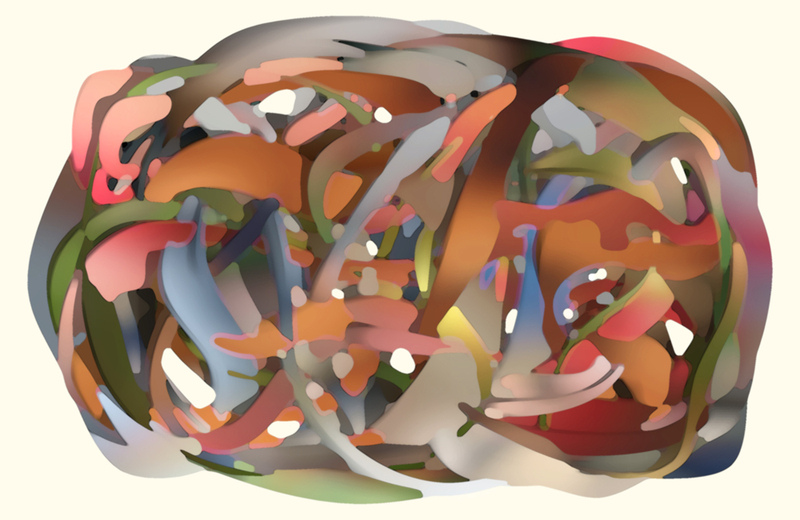 Sorry, just had to get that out of my system. It expresses what I sometimes feel about the twitterverse after a long stretch bathing in the tweet stream. Plus, how often do you get to use 'inchoate' in a sentence? 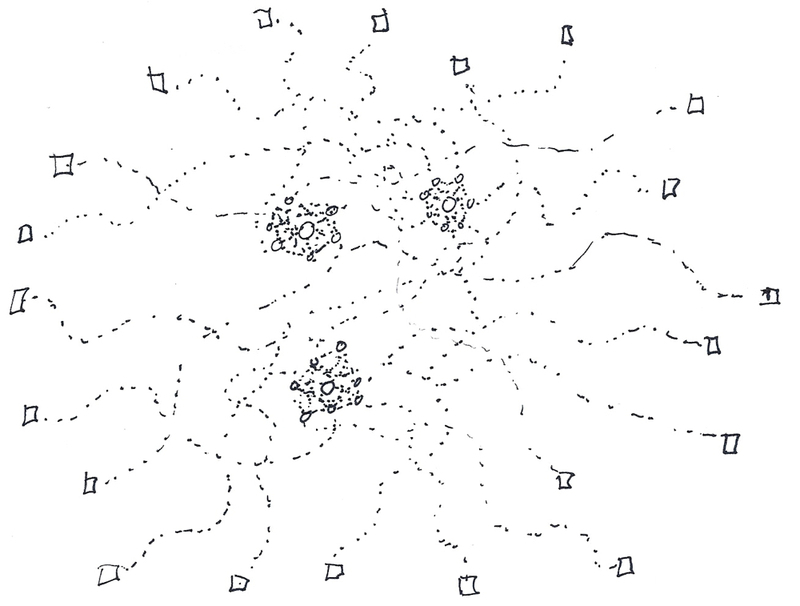 We want to build brain...

We want to connect and share in interesting ways.

We want our mastery to be part of a larger mystery.

We want to make the world a better place.